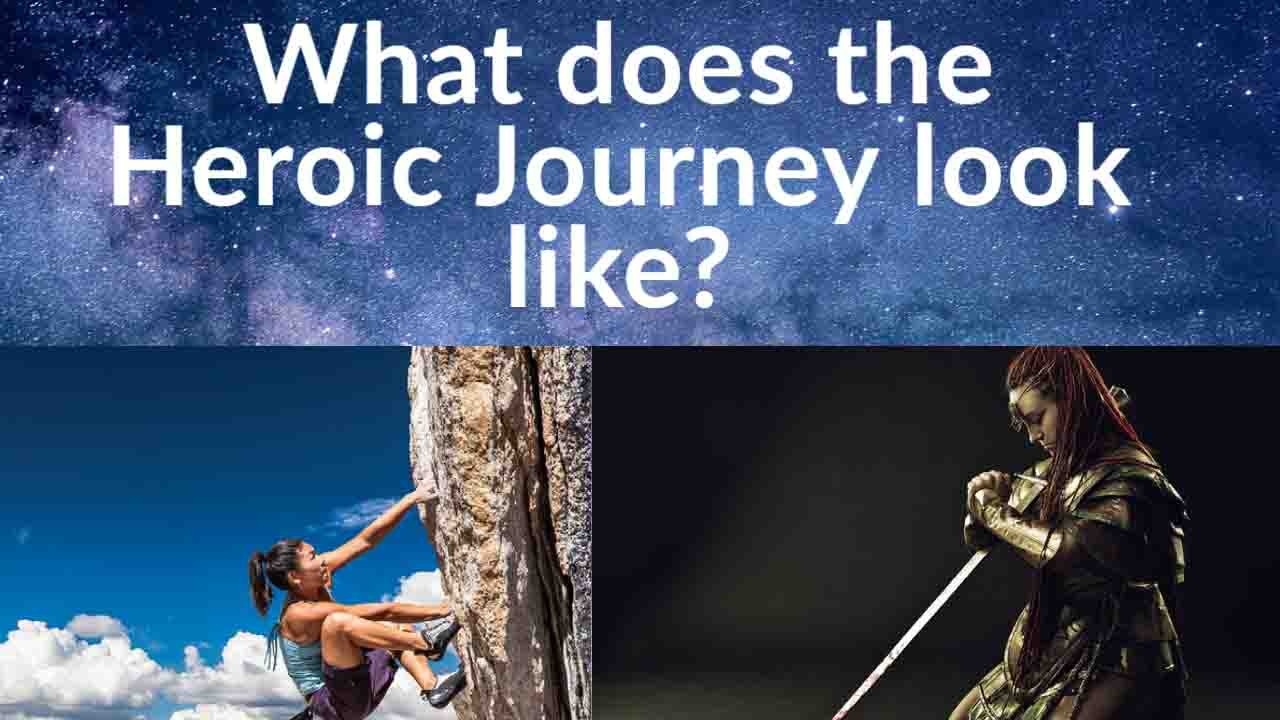 Today’s lecture goes into a simple concept that has been tossed around since it was introduced in 1949.

Isn’t it interesting this is around the same time as the Discovery of the Nag Hammadi Library and the Dead Sea Scrolls?

Uncle Joe (Joseph Campbell) introduced us to a synergistic view of a Universal Structure, common to all Humanity, that he viewed as a Journey and termed the Monomyth.

Since its inception across the globe, it has become more popularly known as The Hero’s Journey (HJ), which was the fault of Patriarchy:

As a result, certain authors swung the pendulum in the opposite direction and created the Heroine’s Journey, which is interesting, but not encompassing.

The Monomyth, in its original form, supersedes Genre and Gender and is a Primary Function for Comparative Mythology, Spirituality, Shamanism, Storytelling, Sociology, Self-Help, and Psychology.

As you notice, the HJ is patterned in the world of Matriarchy (the Sacred Feminine), therefore it is governed by circular time, not linear time.

In this regard, those authors who swung the pendulum didn’t fully comprehend that Heroism has nothing to do with GENDER, it is concerned with CHARACTER.

Rather than deal with this core idea, they chose to battle the Nuclear Fallout of Patriarchal Ideas promoted by Freudian and Elitist Sects.

Today, you’re going beyond that limited world of “DUALITY” and you’re going to shine LIGHT on the power of this Archetypal Model.

You’re going to ask a question they never considered.

Forget the purpose of the HJ, you want to know something else.

If that question flew over your head, that’s fine. 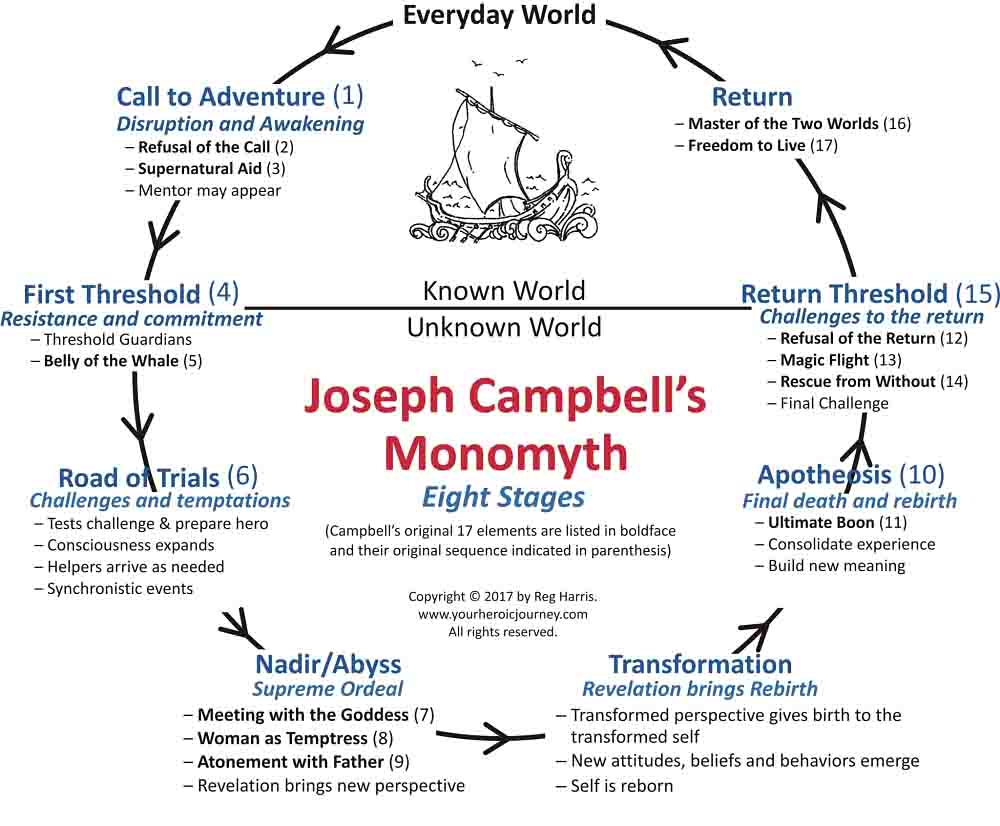 I expect that reaction in the ORDINARY WORLD, so let’s go QUANTUM!

If we view the HJ in its native shape, a circle, a few ideas come to mind.

We see balance in the following: 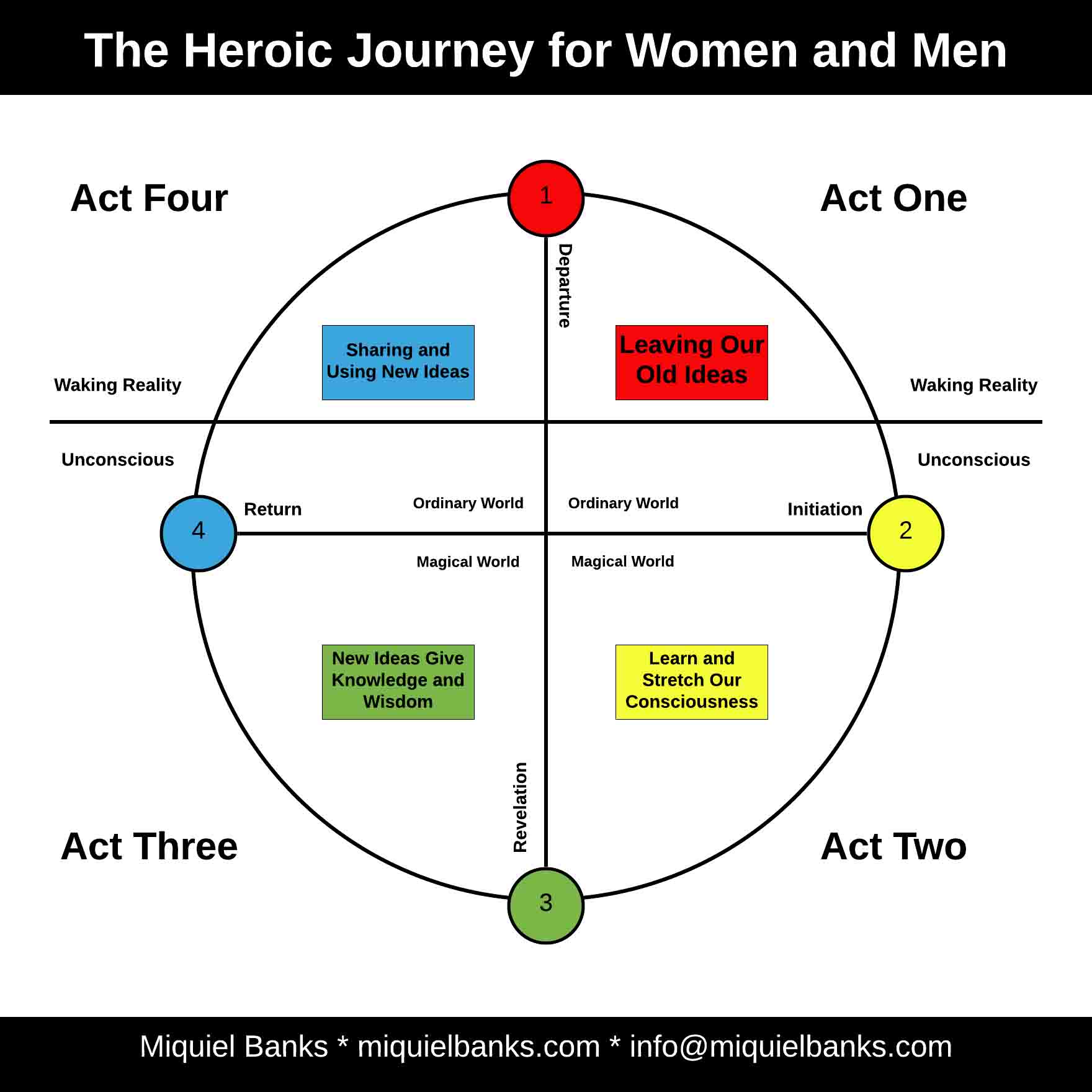 The HJ has Four Stages, but the Movie Industry patterned it within the parameters of their product, MOVIES, so now we view it as having Three Journeys (Departure, Initiation, Return).

I hesitate to call this WRONG, we’ll call it INEXACT.

When you view the HJ with Four Slices, we see Four Journeys (Departure, Initiation, Revelation, Return) and now, the HJ has a richer, deeper, and more evolved meaning.

Structure of the HJ

Now that we clearly see the Four Journeys, we have our first epiphany.

Does the HJ have meaning in our lives?

Is this a pattern for us?

As we look closer, a pattern reveals itself to us:

The HJ has four major steps and for brevity, we will view one cycle to get a better understanding of how it works.

This is a major step because the journey cannot begin until we have an inner epiphany (something is wrong with the world).

Until we have an utter disdain for our environment, the Journey will be a lot of talk and nothing concrete, but there’s something sacred about this statement.

Repeat after me and scream it loudly.

There’s something wrong with the world!

When we set our awareness and energy on this statement, something MAGICAL happens.

That’s right, reality distorts and changes and forces us to take the journey.

In a sense, when “quacky” people say that we create our own reality, this is what they mean.

The Universe is designed to meet us “WHERE WE ARE.”

Sad, some of us are so STUCK IN THE PAST that we refuse to try anything new, much less “THINK” of anything new.

This is the HJ’s first obstacle and if we give in to FEAR, we will NEVER take the journey.

However, we ACCEPT what is happening and we are sincere, so we take the leap.

This is POINT ONE and in Storytelling, this involves two steps (Call to Adventure, Inciting Incident) and is considered ACT ONE.

After taking the leap, we enter a MAGICAL WORLD (Point Two) where people, places, and things exist beyond our imagination.

We have heard rumors and whispers about MAGIC, but we are shaken.

As much as we say something isn’t real - we look and, WOW, there it is!

In the MAGICAL WORLD, we encounter Mentors, Helpers, Challenges, and Temptations.

We must be careful in this part of the journey because we tend to fear MONSTERS in advance, but it is the small items, the TEMPTATIONS, that divert us from finishing the journey.

Like our mother used to tell us, whether large or small, the pain comes when we fall.

And this stage is the ULTIMATE FALL, down we go into an ABYSS of unbelievable proportions - DEATH itself.

However, there is IRONY in the Universal Design and what we call a FALL becomes an Ascension.
In storytelling, this is called ACT TWO.

Awww, the beauty and sacred aesthetics of the Revelation Stage.

After overcoming DEATH ITSELF and being REBORN, we experience divine and magical events:

With the power of Magician Archetype swirling in our DNA, we perform incredible feats of Spiritual Prowess and, depending on the journey, heights and depths are explored in this stage of the journey.

In Storytelling, this is called ACT THREE.

After becoming a GRIOT and GURU, we return to the beginning (Ordinary World) armed with the Holy Grail/Treasure from the Magical World.

This is where many get messed up and waste the journey, but not us.

We know that the Magical World is a SPIRITUAL PLACE, not a MATERIAL PLACE, so we know the

Treasure is something immaterial and exists WITHIN US (as light).

Armed with the treasure (light of freedom/light of wisdom), we return to our Ordinary World and perform local miracles by helping others, solving solutions, and/or providing insights.

However, this is a problem because there are caveats when taking the Heroic Journey and they exist in 3 places:

When you REFUSE to hear and accept the CALL TO ADVENTURE, you remain in the Ordinary World and experience STASIS (Stasis = Death).

As a result, you DIE daily and these are DELUSIONAL JOURNEYS (Belief) that maintain their hold on your Evolution and keep you LIVING IN FEAR.

You grow up (in the Material World), but you keep CHILDISH ideas.

As your environment grows smaller, DRAMA, ISSUES, and FOOLISHNESS run rampant in your world and spreads havoc on you, your families, and your loved ones.

I strongly suggest that you don’t do it, but if you meet these people, please stray from them and this path.

They will “SUCK” your energy and “STRIP” your MAGICAL POWERS.

The DELUSIONAL JOURNEY becomes activated when you begin the journey and out of fear, you turn back and return to the Ordinary World.

As you saw above, the results are the same.

Of the three, this is the most damaging to your Spiritual Growth.

After you receive MAGICAL POWERS, you have a “responsibility” to use it for sacred purposes and not for selfish gain.

When you choose selfish gain, you BREAK THE HEROIC CYCLE and you change from a HEROINE/HERO to a TYRANT.

The beauty of the Hero’s Journey is that when a TYRANT emerges, the Universe will call another Hero (preferably from your family and local village) and he/she will rise through the ranks and he/she WILL DETHRONE YOU and ECLIPSE your achievements.

Now that you know the DARK SIDE of the HJ, let’s finalize with the ANGELIC SIDE (light).

Insights into the HJ

Above, you see a simplified 5-step process for the HJ.

Step 1 is the person in the Ordinary World.

Step 2 is accepting the call to adventure and taking the Journey.

Step 3 is being in the Journey.

Step 4 is returning to the Ordinary World with Magical Powers.

Step 5 is returning to an Ordinary Life in the Ordinary World.

And you’re probably wondering - is that it?

What happens when we get sick of the world again?

That’s right, we take another journey!

We go back to another Magical World and return to the Ordinary World, a MAGICAL BEING armed with newfound power (light).

I know what you’re thinking, this sounds EPISODIC.

Why would we keep taking journeys - how does this help our life?

You are wrong, very wrong.

Let’s look at what happens when we take 8 journeys.

I’m going WAY OUT ON A LIMB, but I know that the Ogdoad (Egyptian Mythology) are Eight Primordial Deities that are mentioned in the Gnostic Texts, so they MUST BE IMPORTANT, and based on the number 9, I accept this.

Cool, let’s look to Numerology for an explanation.

The Number 8 symbolizes mind over matter and it shows us that strength of will overcomes the material world and lives in perpetuity.

But there’s another benefit for the Number 8 and it’s visual.

There's a simple 5-step process for the HJ to make it simple, but now we’re shifting gears to go deeper.

We’re going from one HJ to taking cycles of the HJ.

We start off as one red dot, unaware of what’s going on in the world and even worse, what’s going within ourselves. 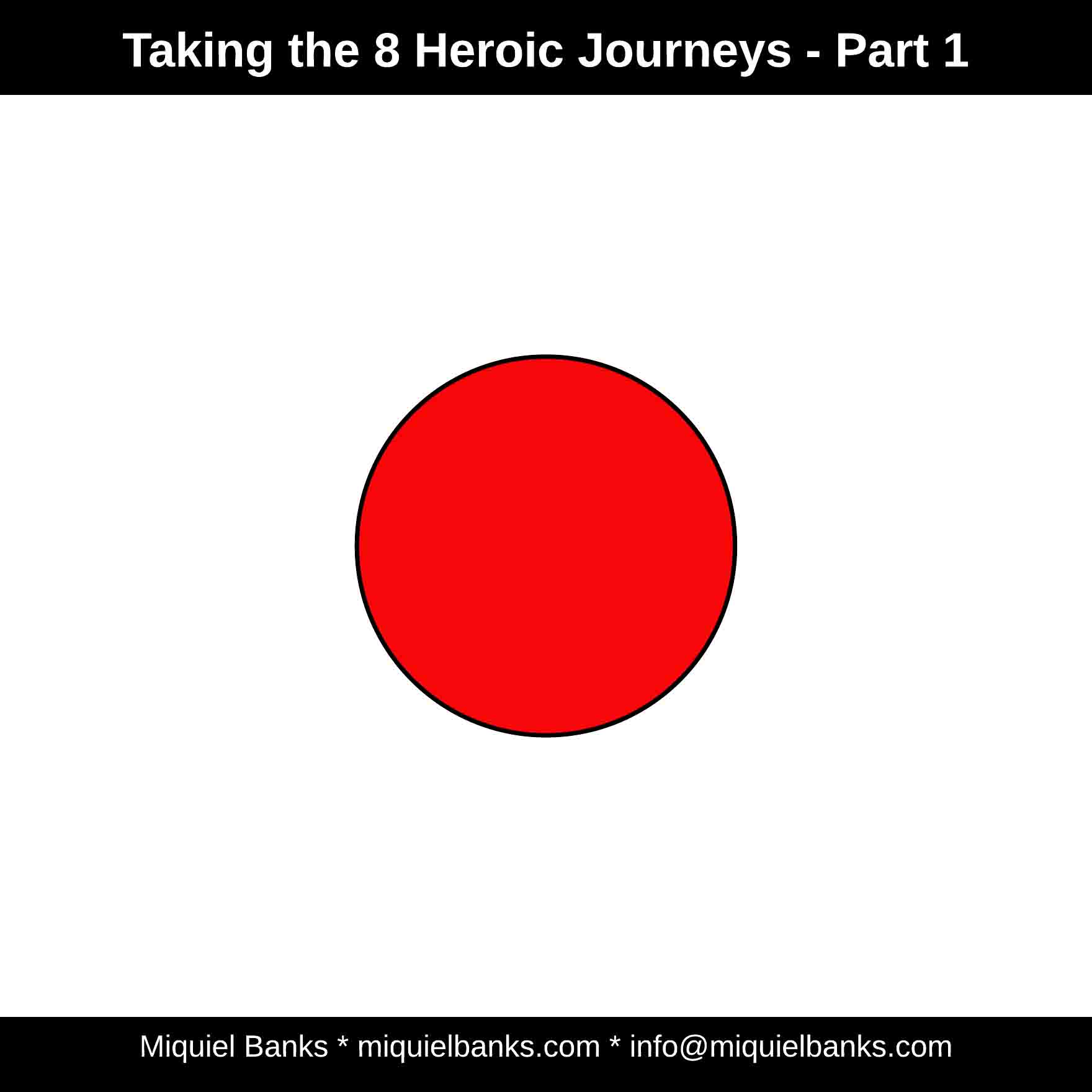 So we take a journey and come back enriched and refreshed and share with the World.

Then, something happens and we’re knocked off course.

So we get pissed off and realize - it’s time to take another journey.

As we take more journeys, once we reach 8 Journeys something magical happens and we leave the world of DUALITY (Red, Yellow, Green, Blue) and we ascend to a higher level (Crown Chakra).

Remember, after taking one cycle of the HJ (8 times), we expand our consciousness and now, we are more responsible, more moral, more evolved, and more aware.

That’s right, we grow outwards and EXPAND OUR CONSCIOUSNESS!

And you are correct, the visual benefit is the HJ looks like the sun, kinda cool though, isn’t it?

After we take 16 Journeys, we expand our consciousness again.

When we take Heroic Journey Cycles, we expand our consciousness and become higher and more evolved Human Beings. 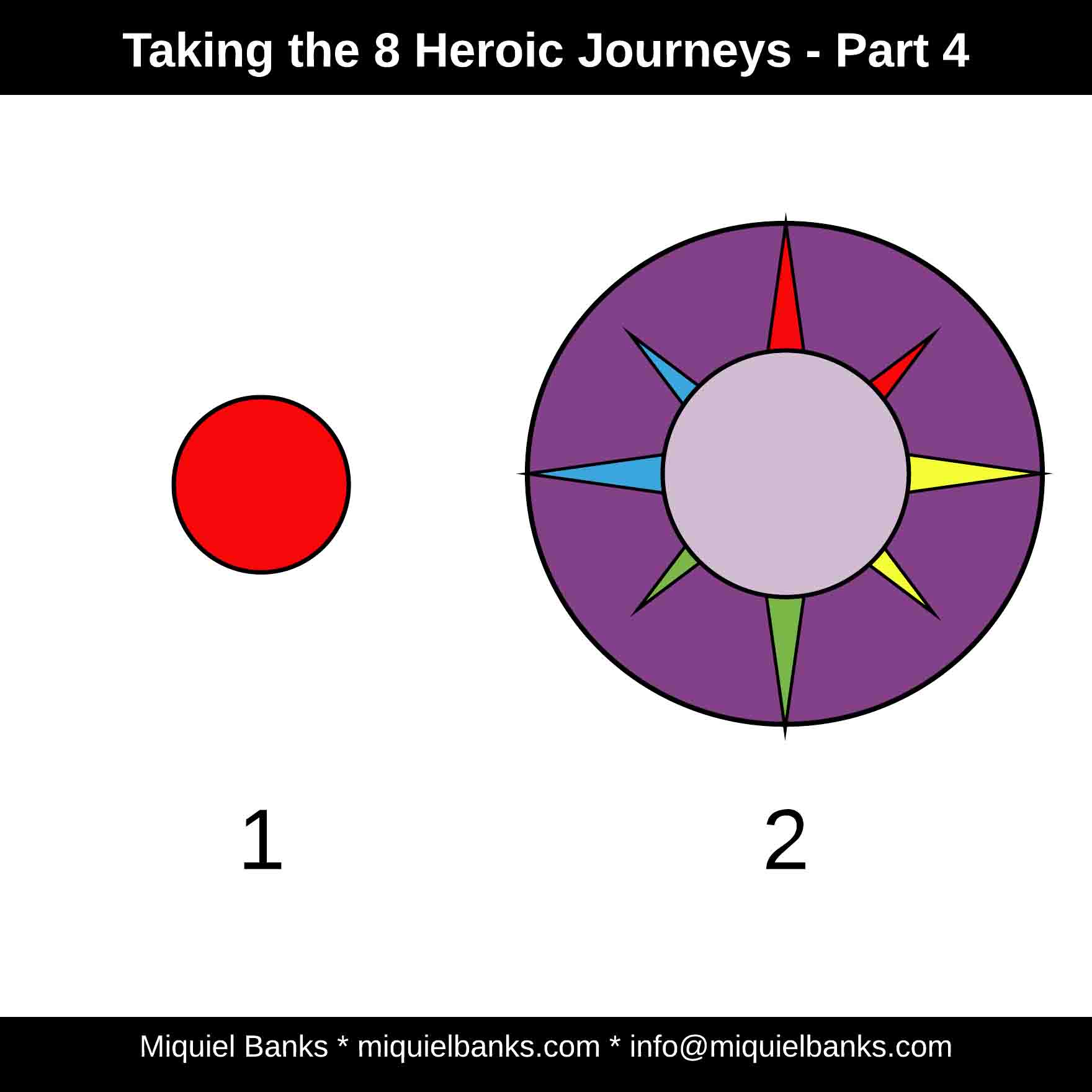 Above, #1 is your best friend who hasn’t grown since High School.

You are #2 after going through 2 cycles of the HJ, look at how much you’ve outgrown that person.
Please, slow down and take a hard look at this image cause this is your life when you take the Heroic Journey.

You will ALWAYS be outgrowing people, places, things, and pandemics.

Return to the Ordinary World

One of the perils of leaving the MAGICAL WORLD is that we are no longer bound by code, honor, aesthetic, truth, duty, and beauty.

If you notice, when we entered the MAGICAL WORLD, I described our journey together and now that we return here, we have become “SEPARATED” by space and time and other factors.

Now, let’s address your issues with this blog.

You ask, why did I spend all this time talking about ME when I came here to help me WRITE STORIES?

You are mistaken about the Arts and Storytelling, so let me hip you to the Truth.

The Reason we took the Journey is because now that you have visited the Magical World, you can write from EXPERIENCE AND WISDOM, not from Delusion or Foolishness.

Look at it like this, the truth about your Humanity is also true for your Stories.

So, everything that happens to you in real life, think of this as “CURRENCY” and the more you understand your problems, the HJ will provide solutions.

Hold on, please step back for a minute.

You should see a Solution as a FORM OF MAGIC.

Think about it, someone (including you) had an issue and you found the solution.

When you provide the solution to someone, you are sharing a solution (higher level of consciousness) and these solutions are ONLY revealed to the Searchers.

Oh My Goodness, you can smile now.

You have been given the keys to the Kingdom of Paradise.

Whether Heroine or Hero, I look forward to hearing about your accomplishments as you return here (our planet) with your Treasure.