How does the Moral Premise work? 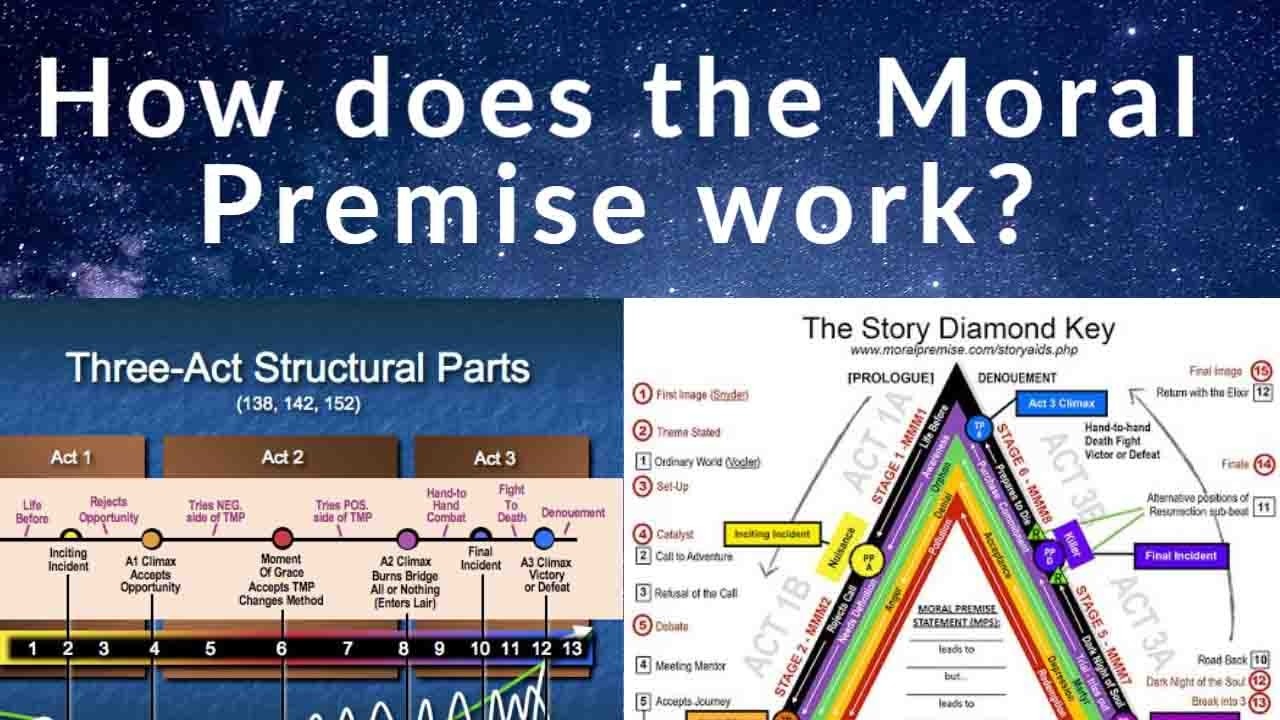 PAIN POINT: Many writers get lost in a story and are looking for a MAGIC BUTTON to fix it.

Think of the Moral Premise (MP) as the "SPIRIT" or "BRAIN" of your Story, working behind the scenes to ensure several things happen:

As the Spirit of your Story, the MP imbues "LIFE" and "ENERGY" into your story and allows your story to BREATHE PROPERLY.

And by breathing properly, I mean your Story maintains balance properly.

How does this look?

In the VISUAL WORLD, you're going to see the following:

What is the Moral Premise?

The short version is the MP is what other people call Theme.

The medium version is the MP is defined as a Natural Law of Storytelling that enables writers with a tool to sculpt your story with microscopic precision.

The MP's General Form is shown below:

In addition, the MP has 2 thresholds that the Characters have to cross.

Finally, the NEUTRAL ZONE is the lowest level of Values in the Story and this logic bewilders new writers.

How can the Neutral area be worse than the Greater Vice area?

The Greater Vice is on a WHITE background, which means it can be seen.

The Neutral Area is black and represents TOTAL DARKNESS, a deadly area for Characters.

In our reality, we define this area as ignorance.

For example, a character can BELIEVE he is helping another character and totally "IGNORE" everything else to fulfill this agenda.

As a character STUCK in the Neutral Zone, he has NO CLUE about who/what is good or who/what is bad and BLINDLY FOLLOWS his own agenda, which is void of all Morality.

How do you use the Moral Premise?

The Moral Premise is a MAJOR STORY TOOL that allows you to create, design, analyze, fix, discuss, explore, and effectively sculpt any story.

So, in our example, we are writing a standard screenplay with 4 Sequences.

Here's what the Moral Premise looks like for this story. 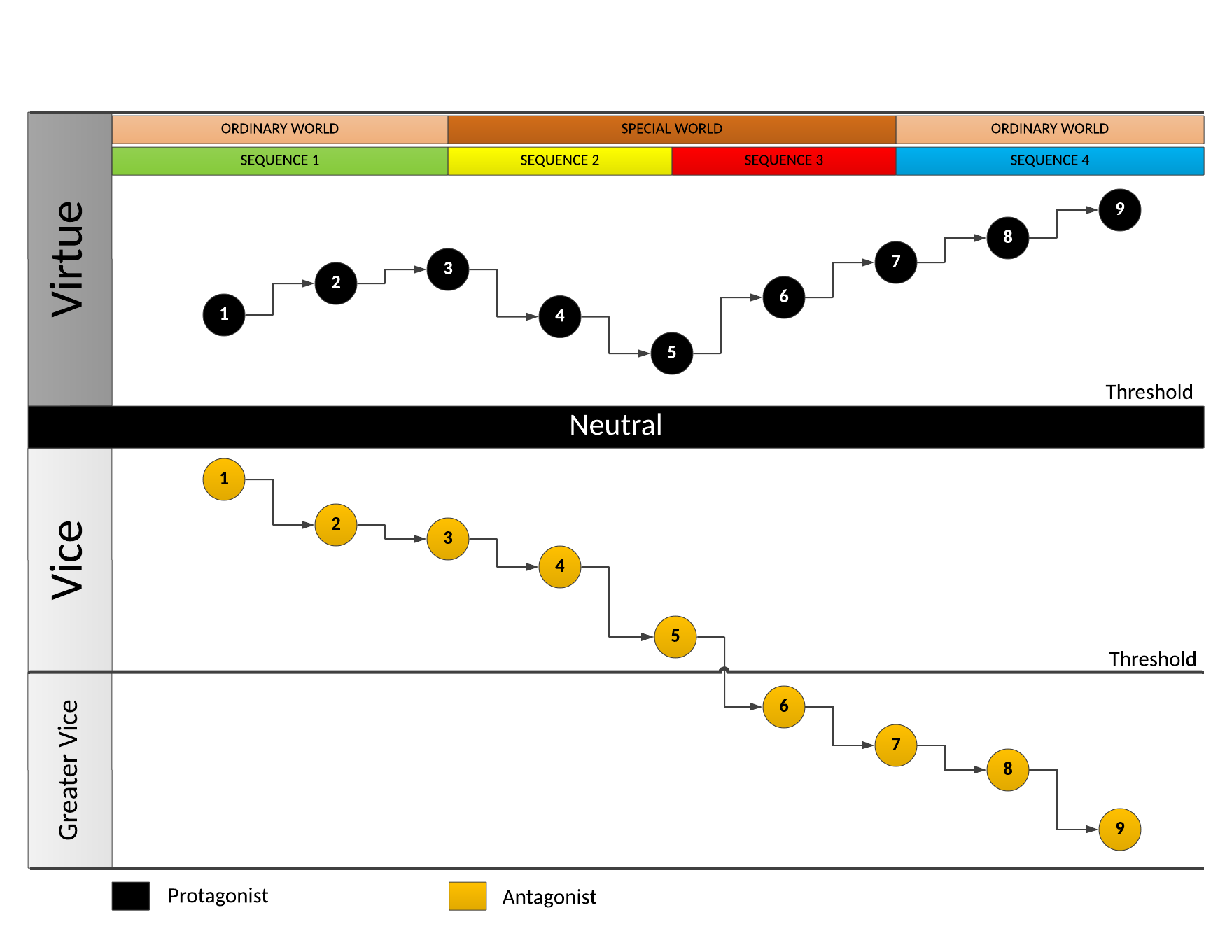 Below that, we have the 4 Sequences.

On the left, we have the emotional compass (Virtue, Neutral, Vice, and Greater Vice).

We use the Emotional Compass to VISUALIZE the Character Arc.

Work out your Story Events

See how easy it is to work out your character arc, visually, beforehand?

That's right, no more meandering around aimlessly cause you were taught by THEORY.

With the Character Arc as a FOUNDATION, you can now add Story Events wherever you see fit:

See how easy and wonderful this is?

Now that you can SEE your Character Arc, you can build your story VISUALLY.

As a result, you can finish faster and write BETTER and STRONGER STORIES.

KEY POINT - The purpose of storytelling is EXPRESSION.

Work out the other Story Elements

Armed with Characters and Events, you can NOW work out the other elements:

Now before you get too TURNT UP, isn't this wonderful how easy and straightforward this is?

Can you see that the Protagonist remains on the Virtue side of the MP?

If you want to add tension, you can push the Protagonist to BEGIN THE STORY on the VICE side of the MP.

This would allow the Protagonist to have a LARGER RANGE in her Character Arc, thus making the story more powerful.

You have a lot of flexibility in the Protagonist's Journey.

However, look at the Antagonist's Journey.

This is typical of most stories and of most Antagonists in our lives.

Sequence 1 - They ALWAYS begin with a bad POV (Vice).

Sequence 2 - Over time, rather than listening to you or anyone else, they go down their path, getting worse along the way.

Sequence 3 - Their mind is so messed up now, they start attacking random and innocent people. You can personify this CHARACTER using a Stakes Character.

The key element is they cross a "THRESHOLD" from being Bad (Vice) to REALLY BAD (Greater Vice).

Think of this moment, in Sequence 3, as the Antagonist like a "RABID DOG."

Sequence 4 - The Antagonist, now set on this path, does something UNTHINKABLE - they get worse! This is why, in most stories, the Protagonist and the Antagonist USUALLY have a one-on-one battle. We're moving away from those kind of stories, but I pointed it out so when you study Movies, you'll know WHY things happen WHEN THEY DO.

Does it make sense now?

Look at all the wonderful ways you can mix and match your story for dramatic effect and not GET LOST IN THE DETAILS.

Enough of that foolishness!

I'm here to help you SEE THE STORY and now, you can SEE why my tagline makes sense.

Let the other people get bogged down in confusion, arguing and endlessly debating about THEORIES! As your Visual Coach, I'm here to SHOW YOU the Truth and allow you to create better and stronger stories.